A group of 34 organizations and institutions have signed the ‘Warsaw Declaration’, hoping to increase international cooperation in the fight against online piracy. The signees, including prominent names such as the BBC, HBO, and NBCUniversal, believe that effective global collaboration is key to address the ongoing problem. 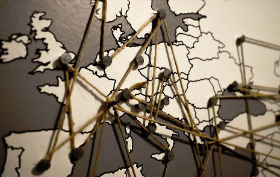 Last month, many key players in the entertainment industries took part in the International Content Protection Summit in Warsaw, Poland.

The summit was organized by the Sygnał Association, supported by the EU’s Intellectual Property Office (EUIPO), with an agenda featuring the latest threats and developments in anti-piracy enforcement.

While these type of gatherings are not new, several of the participants used the opportunity to strengthen their ties. International cooperation, they believe, is a key component for successful anti-piracy enforcement efforts.

To stress their commitment to this goal, 34 participants signed a new memorandum of cooperation titled the Warsaw Declaration. 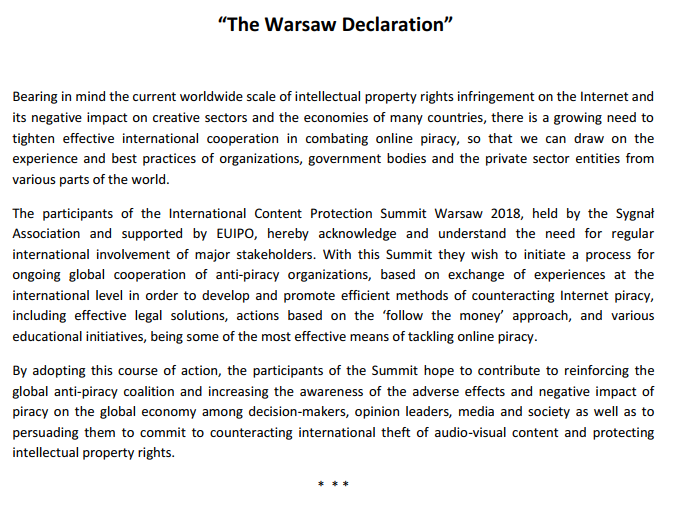 According to the summit’s organizers, the “Warsaw Declaration” can help to target the major piracy threats more effectively. This includes the increasingly global reach of cybercrime, new distribution methods, and the use of cryptocurrencies as payment methods.

“Piracy is currently a highly profitable undertaking with a complicated network of relations. There is proof of its connections to other types of crime. said Teresa Wierzbowska, President the Sygnał Association’s board.

“The alarming figures concerning the scale of theft and illegal trade of audiovisual content are a motivating factor to take action,” she adds.

The declaration itself doesn’t include a concrete plan of action. Apart from acknowledging and understanding the need for more collaboration, there’s not much more to it.

What it does say is that the signees hope to increase “awareness” of the “negative impact of piracy on the global economy” among “decision-makers, opinion leaders, media and society,” and persuade them to counteract this.

Speaking with TorrentFreak, Sygnał Association’s Anna Słoboda notes that the declaration is just the first step. The next stage is to turn it into action.

“For us, it was very important to let people from western and eastern Europe meet each other in one place to exchange experiences and contacts. I am sure that it will soon bring results,” she says.

A copy of the Warsaw declaration is available here (pdf) and a full list of the signees can be found below as well.

The all new iQOO Z1 – The true FLAGSHIP KILLER!!!