Xiaomi had an event today in Japan to mark its official entry into the island nation. The Chinese tech giant was supposed to launch in the country next year but decided to make it early. At the event today, Xiaomi announced five products including the Mi Note 10 series, the Mi Smart Band 4, Mi Power Bank 3 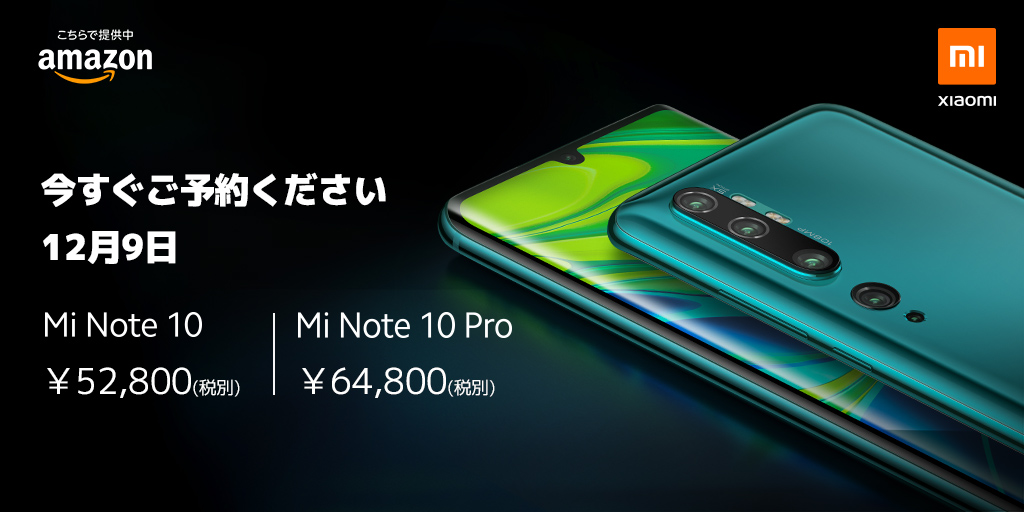 The Mi Note 10 has a 6.47-inch AMOLED FHD+ display with a waterdrop notch and Gorilla Glass 5. It is powered by the Snapdragon 730G processor and packs a 5260mAh battery with support for 30W fast charging that allows you to charge the device from empty to full in just 65 minutes.

The phone has a 32MP selfie camera and a 108MP penta-camera setup on the back. The primary sensor is paired with a 12MP telephoto lens with 2x optical zoom, another 5MP 5x optical zoom camera, a 20MP ultrawide angle camera, and a 2MP macro camera. There is NFC, Bluetooth 5.0, dual SIM support, an audio jack, a USB Type-C port, and an in-display fingerprint scanner.

The Mi Note 10 Pro has nearly the same specs but its 108MP camera has an 8P lens and not a 7P lens like the standard version. It also has more RAM and storage. The Mi Smart Band 4 is Xiaomi’s latest fitness tracker and it has made its way to Japan. The Mi Smart Band 4 will be sold for JPY 3490 (~$32) excluding tax by Amazon Japan. Pre-orders begin today while sale begins on December 23.

EDITORS PICK: Lu Weibing discloses that the Xiaomi Max series has been discontinued! The Mi Power Bank 3 10000mah version brings 18W fast charging support for JPY 1899 (~$18) excluding tax. The power bank will be available in blue and silver and sold by Amazon but there is no mention of when it will be available for purchase. The Mi Power 3 10000mAh is different from the one that launched in China early this year. The one sold in Japan has two full-size USB output ports rather than one. Its USB Type-C port is also only an input port, not a 2-way port. The power button is also a circle and no pill-shaped. You still get a MicroUSB port.

Xiaomi says the power bank is also allowed on flights.

Rice is a pretty popular food in Japan, so it is a smart move for Xiaomi to launch its Mi IH Rice Cooker in the market. This is a smart home product, so it works with the Mi Home App. If you are a frequent traveler, then Xiaomi’s Mi Luggage will surely interest you. It will be available in Japan in two versions: a metal version with an aviation-grade aluminum body and a JPY 17,990 price tag and a more affordable JPY 7990 (~$74) version made of Makrolon. These suitcases will also be sold by Amazon. The metal version comes in silver while the Makrolon version is available in blue, gray, and black. Both are 20-inch suitcases with TSA approved locks and adjustable handles.

Xiaomi also had the Mi MIX Alpha on display at the event but it was in a sealed box and could not be touched. Surprisingly, no Redmi products were announced at the event.

UP NEXT: Xiaomi Mi Note 10 to launch in India by January 2020; pricing leaked

OPPO Reno3 Pro 5G exposes all its specs for TENAA

Motorola One Hyper to launch in Brazil on December 3

Honor 20S gets a silent launch in Russia, goes on sale Nov. 15